A few weeks back I got a gaming headset to test and review! This headset came from my friends over at Diamond Multimedia. It’s their GHXS21 gaming headset. The headset comes with several extras. These extras are extra ear paddings and a 3.5MM jack splitter. It also has a built-in microphone and LED’s. I will get more into that stuff in a few, but first let me show you the box it comes in and your first glimpse of the headset itself. 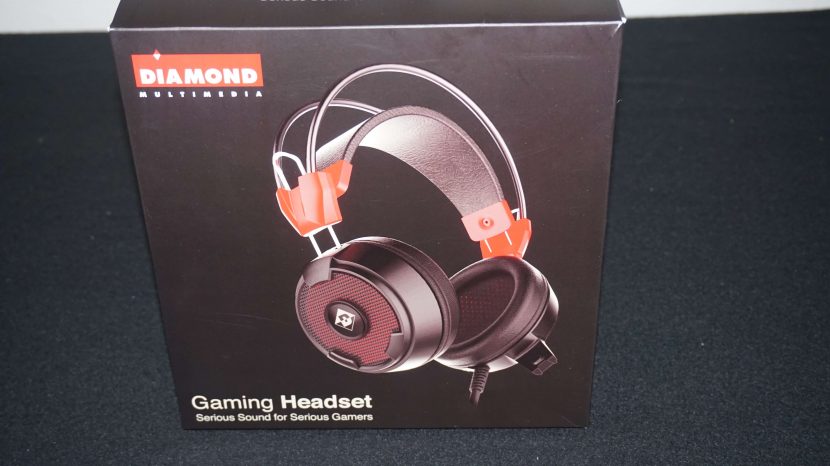 You can tell from that photo the headset itself is black and red. The LED’s shine through a wire mesh cover .  On the side of the box, it provides some of the details of the headset, specs, driver size and more. 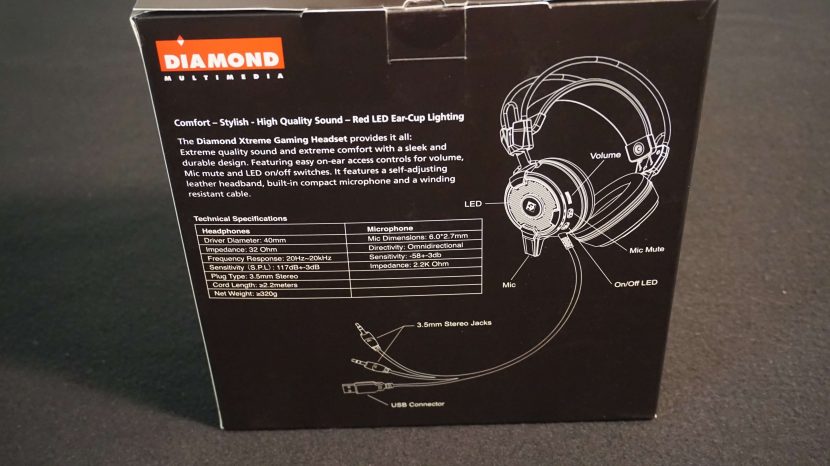 The box clearly tells you everything you need to know about the headset. I will give you a more in-depth look of that in a few.

I bet you want to see the headset and what else is in the box? Well, let me show you. 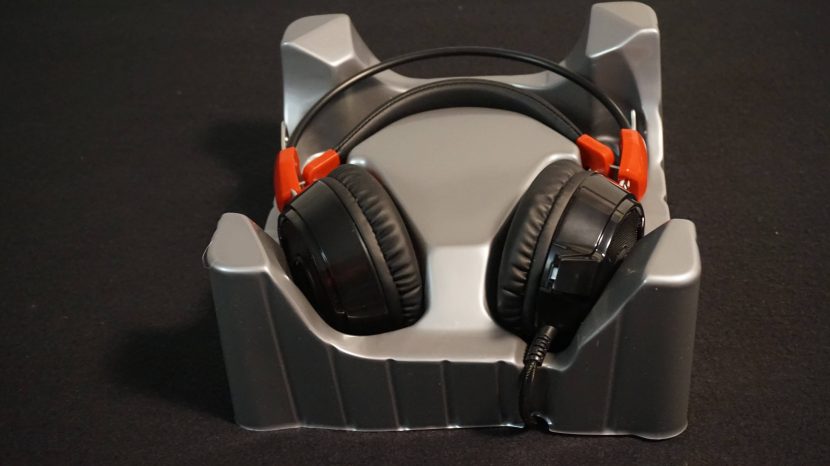 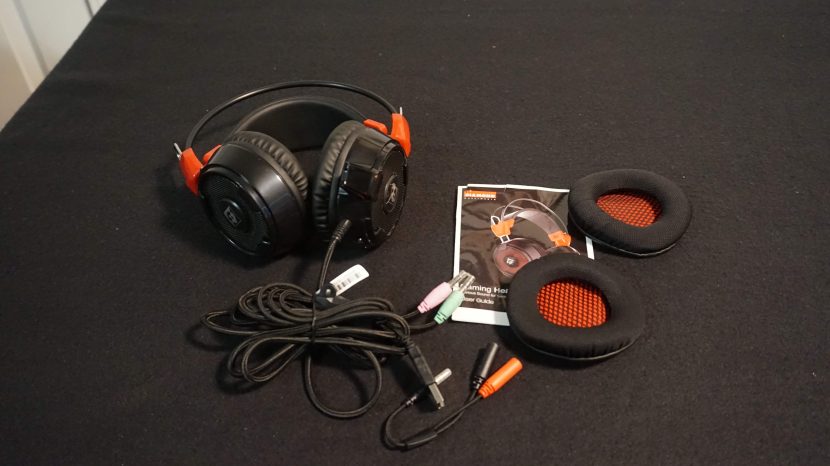 Like I stated before you get an extra set of ear pads and wire splitter.  The splitter is so you can use the dual wires on a single style plug, a Microphone and audio jack in one. To be used on things like a cell phone or even a ps4. The headset itself has dual wire set up with USB. 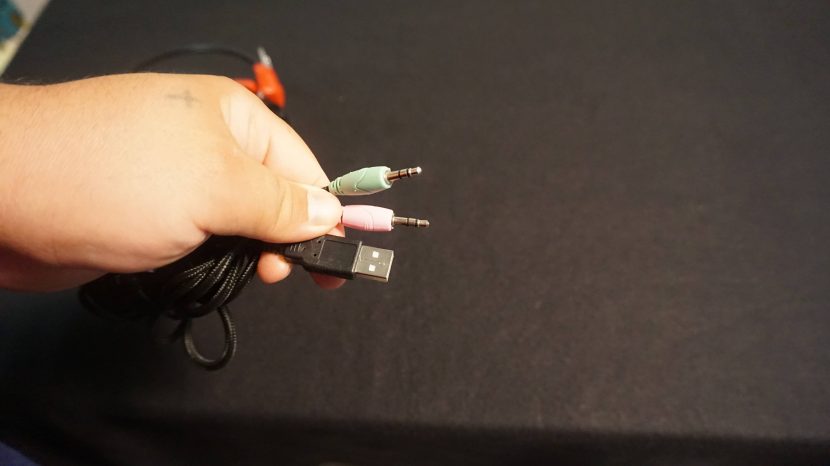 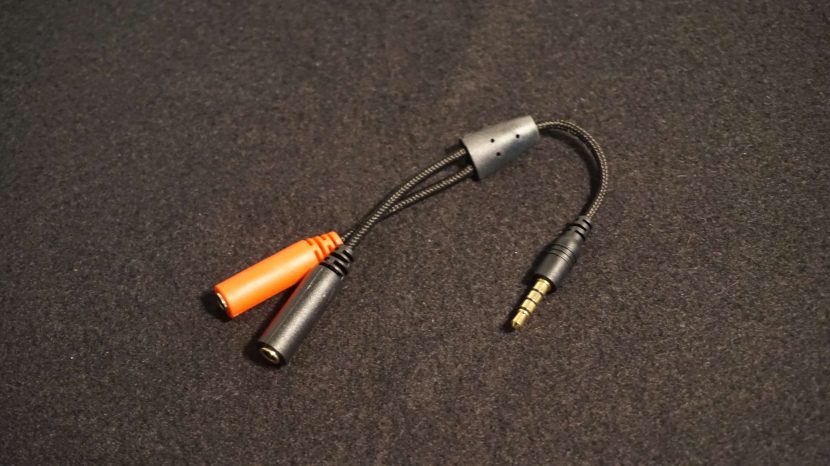 I thought it was a little weird that the splitter was red and black when male ends of the 3.5mm connections coming from the headset itself were pink and green but that might just be the OCD in me.  I did test the cable on my PS4 and it worked just fine. The only issue was that you can’t use the USB connection on the device since the 3.5 mm jack plugs into the controller and the USB plugs into the console. This means everything works but the LED lighting will not unless plugged into the PS4, it will work but its a really short cable. Raising and lowering the volume level works as well as the microphone and mute.  Don’t get me wrong if you want to sit really close you can get the LED’S to work, just might be a little uncomfortable.

Check Out My Video Of The Issue Here!

Let me show you what it looks like when using the USB on the console. 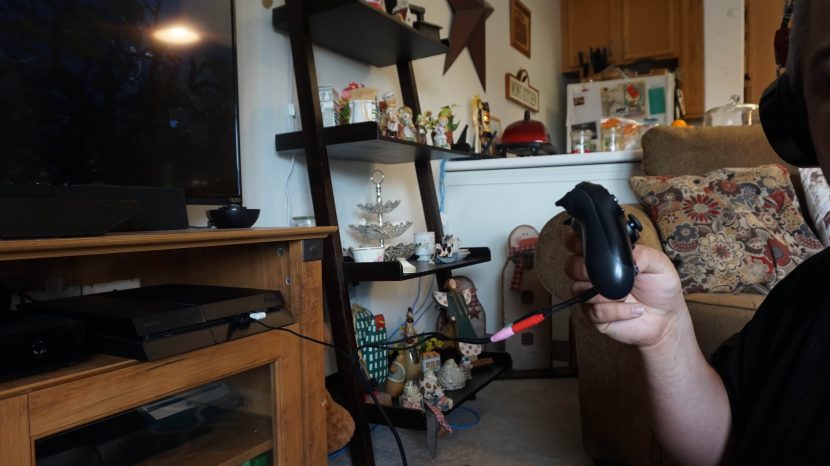 Check Out My Unboxing Video Here!

The instruction manual included walks you through how to change the buttons and ear padding.  I will walk you through some of that later on, but let me show you some more close ups of the headset itself. 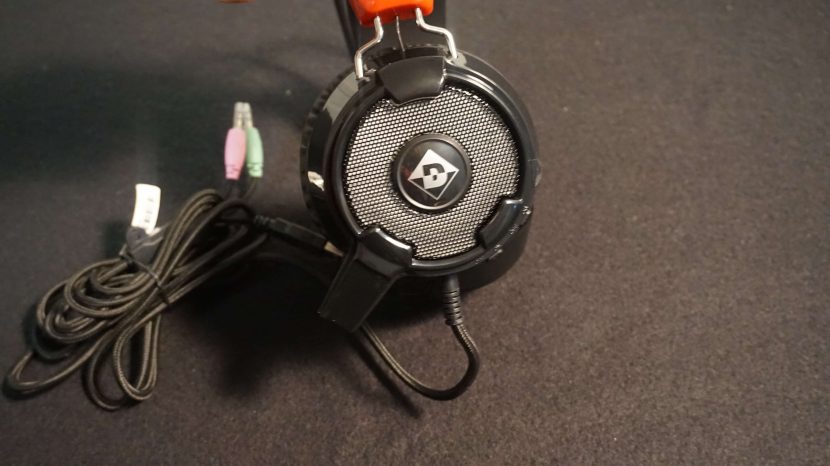 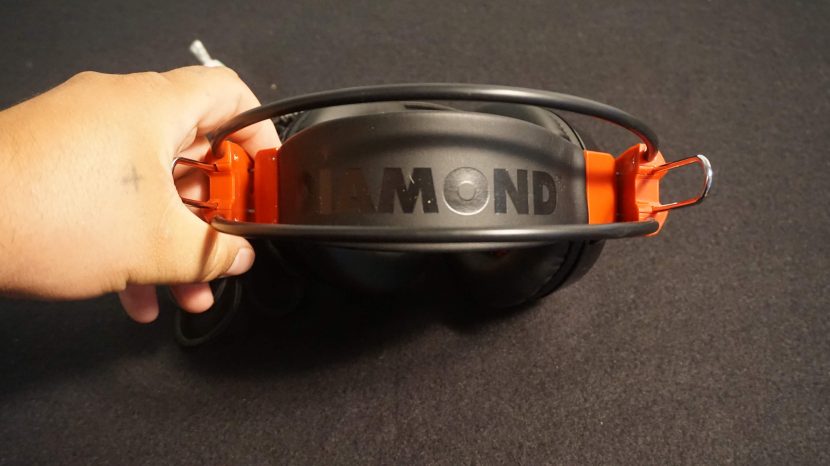 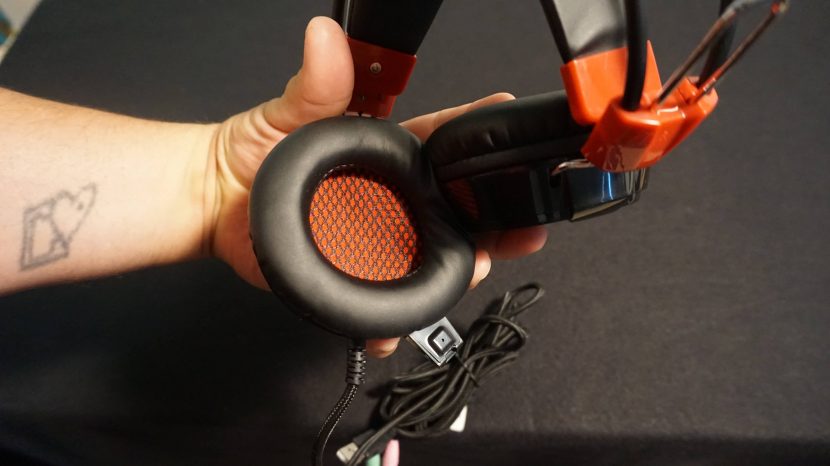 The design is more modern, kinda follows a few other brands out there that I have seen with the dual band with a leather padded strap underneath. With that being said the padding is very comfy and covered in leather. They also have their logo on the padded head strap. The coloring is nice and clean. Which is extended when the LED’s are on and going. The headset itself is light and can be worn for hours with no issue, they can also be adjusted to fit most heads.

The ear pads themselves can be swapped out for the second pair that comes in the pack. The pads that are already installed are connected to a plastic round retaining clip. You simply pry them loose and remove and install the new ones and reverse the process. I  will post a few photos and a video of how to swap the pads. 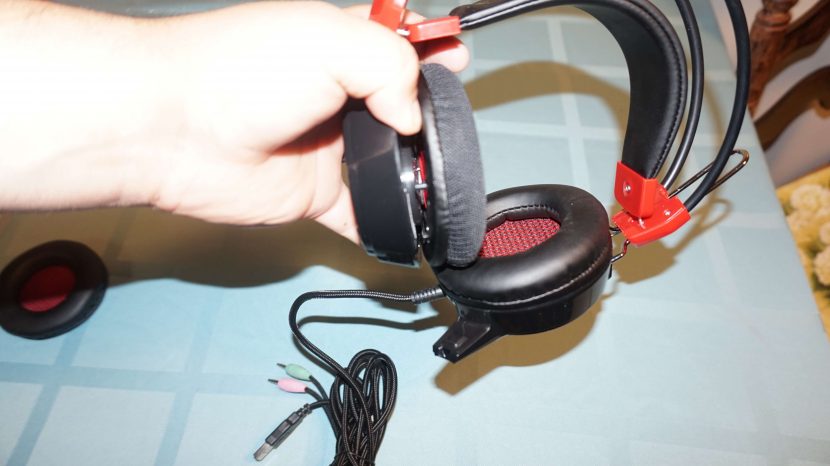 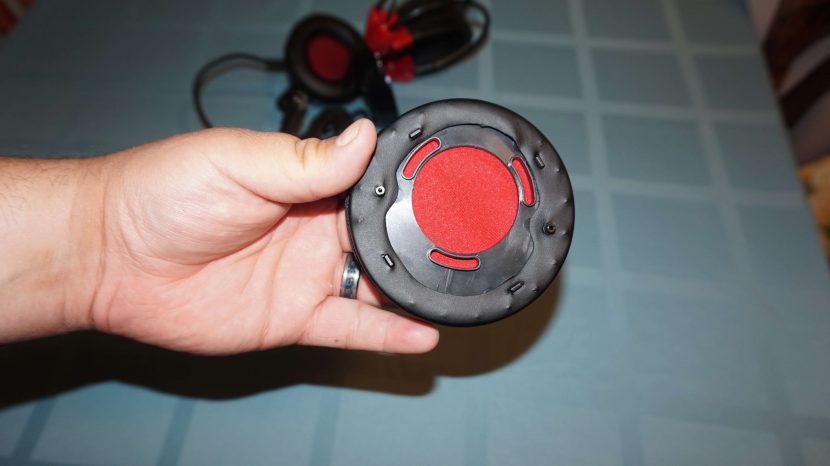 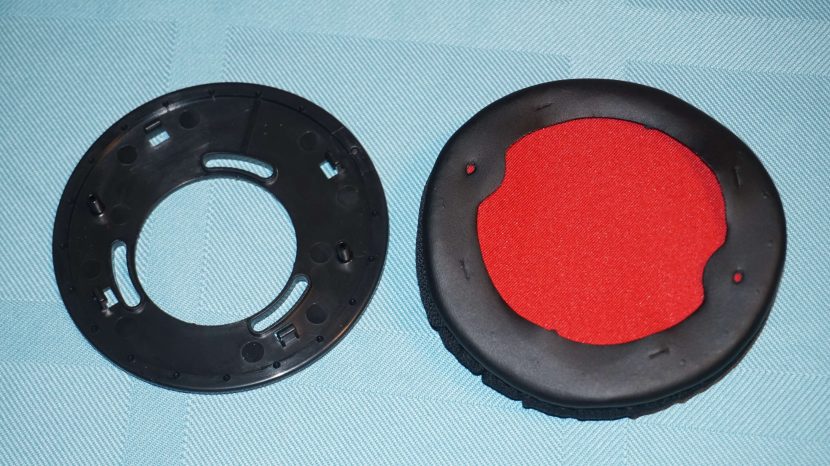 As you can see it’s a rather easy and very quick process.

Now for the LED’s they look nice on or off. The one drawback is you can not use the LED’s on your console device unless you want to have a cord strung out everywhere.

Let me show you the headphones with the LED’s on and off. 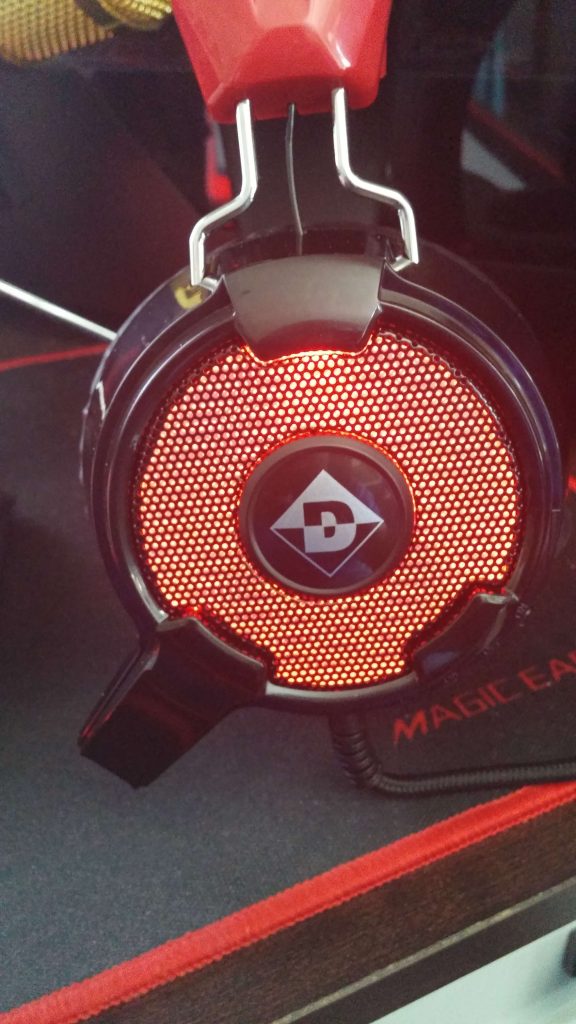 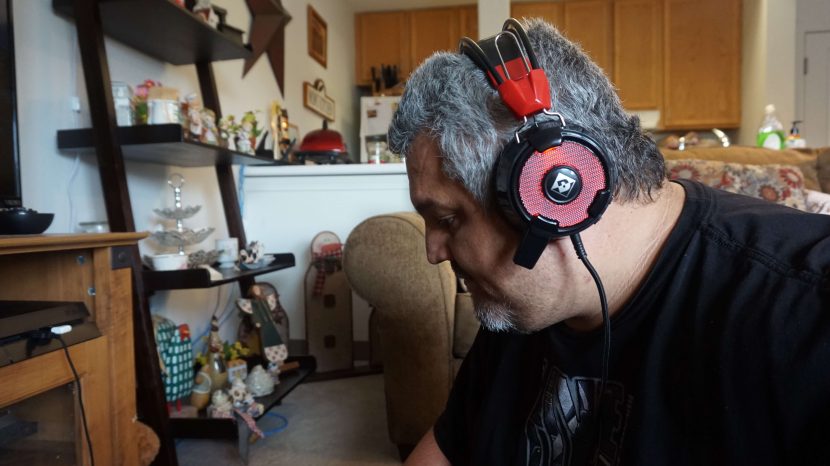 As you can see the microphone is on the left-hand side of the headset, this also includes the volume button and mic on and off switch.  You can control the LED’s from here as well. 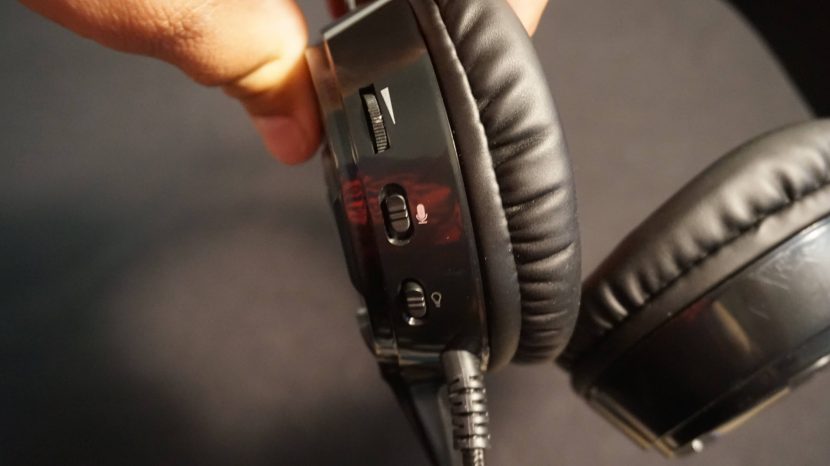 The microphone is fixed in place and not that large, it works well with little issue. I did test it in a few places and even did a little video so you can hear it in use.

You can check that video out Here!

For a headset that runs around $40, this hits some good marks. The microphone sounds decent and can work with your PS4 and Xbox one. When listing to these with music on they sound alright.  They do lose out on some bass. If playing in a game you get the right bass line. This would be for the part like gunfire or someone’s footsteps. Now like I said though in music you lose that back end bass that would put them over the top.  You didn’t buy these for the music though since their gaming headset.

The price range is what makes it for me. I mean 40 dollars isn’t that hard to come up with and for the comfort you get you also get some style. The LED’s set the headset a notch above from others in it class range, that and they throw in some extras that most don’t give you for this price range. The extra’s as I mentioned before are the extra ear pads and wire splitter. I don’t see anyone going wrong getting this set for their collection or just for their everyday use.

Disclaimer:Diamond Multimedia sent me their GHXS21 Gaming headset to so I could do a showcase and share thoughts on the product. All opinions are 100% mine and mine alone. For more information visit http://bit.ly/dbdisclose